Poland regained independence in 1918, and the country, reborn after 123 years of bondage, faced a number of challenges. The most important of them was the war with Bolshevik Russia, which was already smouldering at the end of 1918 and which broke out into full force at the beginning of 1919. However, it was not an ordinary border conflict such as many of those days. In fact, it was the war to decide Poland’s independence and the new order in Central and Eastern Europe.

The Treaty of Riga concluded on 18 March 1921 ended that war. It not only sealed the independence of the Polish State, but was also a natural continuation of the Treaty of Versailles of June 1919, which represented the new order in Western Europe. In order to understand the complexity of the situation of Eastern Europe in the interwar period, it is necessary to become familiar with the assumptions, consequences and significance of the Treaty of Riga. Although the Treaty was primarily of a border nature, its political implications were far broader. Did its consequences really end in 1939? How did the West, in its unusual role as a passive observer, perceive the Treaty? How was the Treaty perceived in Poland? The authors of the publication “Victorious peace or truce for a generation – the Treaty of Riga from the perspective of 100 years” try to answer these and many other questions.

The scientific monograph “Victorious peace or truce for a generation – the Treaty of Riga from the perspective of 100 years” edited by dr hab. Zbigniew Giżyński and prof. dr hab. Jarosław Kłaczkow, is the result of the conference organised by the Institute De Republica with the Chair of History of the 19th-20th Centuries and Contemporary History at the Nicolaus Copernicus University in Toruń and the Parliamentary Group of History Enthusiasts.

The Conference as well as the publication emphasises the importance of the victorious war against the Bolsheviks in 1920, which ended with the signing of the peace treaty in Riga in March 1921, in our history and struggle to maintain independence. 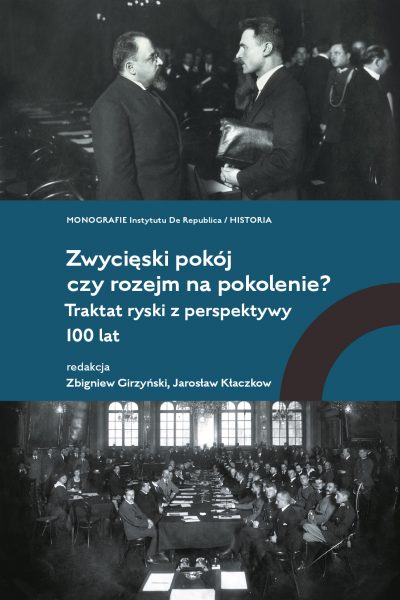