Julian Talko-Hryncewicz was born on 12 August 1850 in the estate of Rukszany on the Niemen River in the Troki county (Vilnius governorate) in Lithuania (now the Grodno region in Belarus). He came from a noble family originating from Iłgowo, and his parents were Dominik Jan, a doctor, and Leokadia née Fiszer. As a four-year-old boy, following his parents’ divorce, he was placed under the care of his maternal grandparents, Adam and Domicella (née Dworzecka) Fiszer. After completing the sixth grade at secondary school in Kowno, he began an apprenticeship in the family pharmacy. Then, until 1869, he attended a private secondary school in St. Petersburg. He wanted to study at the Main School in Warsaw, but was not accepted so he decided to study medicine at the Medical and Surgical Academy in St. Petersburg, which he began in 1870. The choice of university course was certainly influenced by family tradition – his father, grandfather, uncle as well as his step-brother and mother’s brother were all doctors educated at the Vilnius University. Talko-Hryncewicz was not a regular student at the St. Petersburg university. After two years of study and passing the “semi-medical” exam, he moved to Kiev to study at the St. Vladimir’s University. There he obtained a medical diploma in 1876 and started his internship in Zwinogródka in Podole, in the Kiev province, which was, as he described it, “a small county town on the outskirts of the former Republic of Poland”. In the same year, he decided to study at universities in Vienna and Paris for a year. He started his journey from Galicia, visiting Lwów and Kraków. In the former capital city of Poland, he became fascinated by the scientific environment of the Academy of Arts and Sciences, which gathered scholars from all lands of the former Republic of Poland. He made contacts with Polish anthropologists Józef Majer (1808-1899), Aleksander Kremer (1813-1880) and Izydor Kopernicki (1825-1891). While in Paris, he attended lectures by the surgeon Pierre Paul Broca (1824-1880), at the École d’Anthrhropologie de Paris, which he founded, concerning various fields of knowledge on the human being. According to Talko-Hryncewicz: “Invigorated by the impressions I received from Paris, I focused my interests on the field of anthropological research. […] These were the times when Majer and Kopernicki began to publish the anthropological materials they had collected from studies of the Galician population. I contacted them, especially the last one, and from that moment Kraków, until Kopernicki’s death in 1891 and my departure for the East for many years, was my source of guidance and advice for my work in the field of anthropology”.

After returning to Zwinogródka, he worked as a doctor, mainly focusing on obstetrics and gynaecology. However, he could not abandon his scientific ambitions – he collected materials and published articles in the field of anthropology and archaeology, as well as engaged in socio-political and literary-scientific topics under the pseudonym Jan Igłowski.

Due to him, in one of the barrows in Ryżanówka, a well-preserved Scythian tomb with gold and silver relics was discovered. He spent the next few years collecting materials on folk medicine in southern Rus and was the first to compile an anthropological monograph on the Ukrainian people.

At the beginning of 1891, after 14 years of work in Ukraine, he collected anthropological materials in Rus and Lithuania during a several-month trip to his native land. He met his relative Krystyna Szabuniewicz at the Antonov estate in the Marijampole region and married her on 10 December 1891. Due to the difficult financial situation of his newly established family, he decided to work as a doctor in Siberia.

The stay in Siberia

Six months after their wedding, he and his wife travelled via Moscow to the town of Troickosawsk-Kiachta in the Zabaikkalsky region near the Mongolian border. There he accepted the post of regional doctor, performing mainly forensic and medical functions. His main duty was to perform autopsies. At the end of his stay in Siberia, he was seconded to the capital of Mongolia, in connection with an outbreak of the bubonic plague. He published his observations on the aetiology of this disease (he found that the main carriers there were rodents – tarbagans) in several medical journals. He continued his anthropological and ethnographic research in his spare time and, as a result, described the anthropological characteristics of the Evenks, Tunguzas, Tatars, Chalchas, Chinese and Chuvash. At that time, his attention was drawn to the intermingling of races and cultures of borderland peoples.

Scientific works published by Talko-Hryncewicz in Russian and Polish periodicals during his stay in Siberia were highly respected, and his contribution to the development of anthropological research was awarded in 1904 with the great gold medal of the Geographical Society in St. Petersburg.

After ten years in Siberia, the couple decided to return, at least for a while, to their native land. In spring 1902, during their six-month leave, Talko-Hryncewicz visited Antonów, Kowno, Vilnius, Warsaw and Kraków, where he met with a number of scholars, including the rector of the Jagiellonian University, as well as Lwów, where he was guided by Benedykt Dybowski. The Talko-Hryncewicz family had to return to Troickoslavsk, although, as he wrote, “Kraków, which I had stopped dreaming about for a long time, stood on the path of my life again”.

His stay in Kraków reminded the scientific community of his achievements and, on 11 May 1903, Julian Talko-Hryncewicz received the title of a correspondent member of the Faculty of Mathematics and Natural Sciences of the Academy of Arts and Sciences in Kraków. This distinction initiated the efforts of Kraków scholars to appoint Talko-Hryncewicz the head of a newly created chair of anthropology. The struggle for that post at the offices in Lwów and Vienna lasted several years, during which Talko-Hryncewicz prepared the content of his lectures in manuscript form. He approached his future lecturing duties very seriously and was also afraid of meeting students, as he wrote in a letter to Professor Edward Janczewski (1846-1918): “Pedagogical activity is completely unfamiliar to me […]. It is also necessary to overcome some difficulties in speaking Polish, because although I am constantly writing and reading in my native language, nevertheless a sixteen-year stay abroad could not remain without effect”. While waiting for an opportunity to work at the Jagiellonian University, he received proposals to hold university chairs in Lwów and Dorpat, however, as he wrote, “Kraków was the city that suited my national aspirations best”.

Finally, on 12 September 1908, Julian Talko-Hryncewicz was appointed an associate professor of the Chair of Physical Anthropology at the Faculty of Philosophy of the Jagiellonian University. According to Professor Talko-Hryncewicz, the programme of his lectures was inspired by the notes of Izydor Kopernicki, who, similarly to him, regarded “physical anthropology as a comprehensively developed monography on man”. Furthermore, he consulted their content with Benedykt Dybowski.

The Department of Anthropology at the Jagiellonian University (at 53 Grodzka Street), which was enriched by Professor Kopernicki’s collections, was officially opened not until November 1911.

During that period, Talko-Hryncewicz with his wife Krystyna as well as his assistant Eugeniusz Frankowski collected, inter alia, materials concerning the highland population of the Podhale region. Their very intensive research work provided the basis for around 150 scientific publications. He also actively participated in creating the scientific concept of the newly forming Ethnographic Museum. The climax of his research and lecturing activities was the title of full professor, which he obtained in 1913.

Since he spent a number of years in Siberia, he greatly valued his personal contacts with other scholars. One of the most eminent persons in his circle was his friend Bronisław Piłsudski (1866-1918), ethnographer and world-famous expert on the language and folklore of the Aynes, whom he helped to become a collaborator of the Anthropological Commission of the Academy of Arts and Sciences.

In the summer of 1914, Talko-Hryncewicz (with his wife) left for field research in the surroundings of Lida, and subsequently to St. Petersburg. When the First World War broke out, he was in Finland, which meant that he could not return to Kraków. For the next four years, he worked as a doctor in Petrograd: for the first two and a half years at the Polish Hospital, and then he managed a lazarette for the soldiers of the Eastern Siberian Buriats. He used his work at the hospital to acquire interesting anthropological materials, which provided the basis for a study published in print already in free Poland. In 1916, he also lectured on anthropology at the Polish Higher Courses established by the Polish Society of History and Literature Enthusiasts.

In 1917, the Talko-Hryncewicz couple moved to Kiev, where for a year the professor lectured at the Polish College of the University. After Poland regained independence, he helped organise the Department of Anthropology at the Stefan Batory University in Vilnius and he returned to Kraków only in spring 1918. He was appointed the Chair of Anthropology at the Jagiellonian University again and took charge of the development of the Department of Physical Anthropology, to which he donated his own collection, library and scientific documentation. The subject of his research at that time was the measurement of skeletons from Kraków cemeteries.

The fifty years of his scientific work were crowned by obtaining the honorary doctorate of the Jagiellonian University and the Commander’s Cross of the Order of Polonia Restituta in 1926, and a year later he became an active member of the Polish Academy of Arts and Sciences in Kraków. He retired in 1932.

He died in Kraków on 26 April 1936 and was buried in the Rakowicki Cemetery. 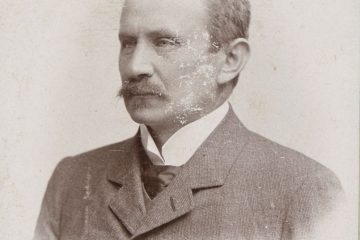 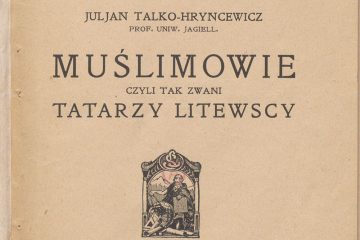 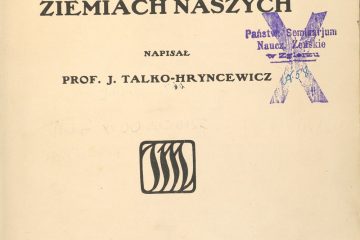 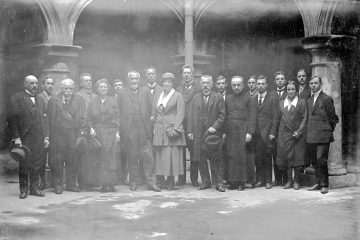 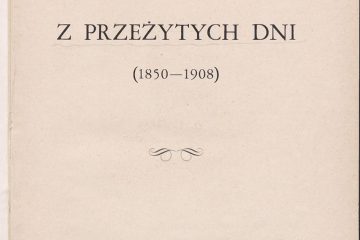 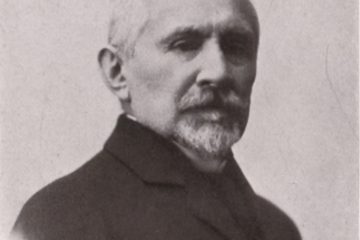 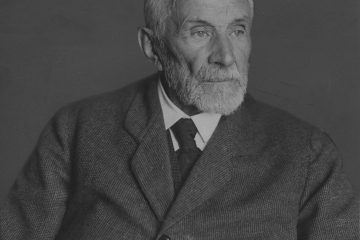 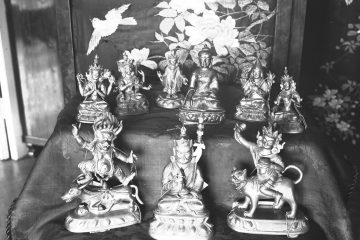 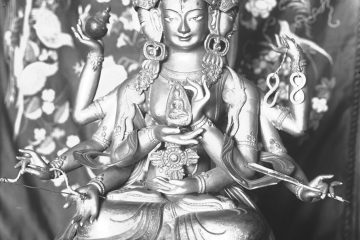